Blink-182's Mark Hoppus is the co-writer and features on Amy Shark's single, Psycho, from her 2018 debut album, Love Monster. When he couldn't appear with her on stage to sing last night, Shark brought out none other than Gladiator superstar Russell Crowe.

When you're Amy Shark and have friends throughout the entertainment industry, finding a special guest can produce pretty extraordinary moments.

She performed at Crowe's Indoor Garden Party at the Hoey Moey in Coff's Harbour alongside Janet Devlin and other artists on the bill.

Posting the clip on her Instagram story, Shark called Crowe Hoppus's understudy and captioned their performance, "This is how much Russell Crowe likes my song." 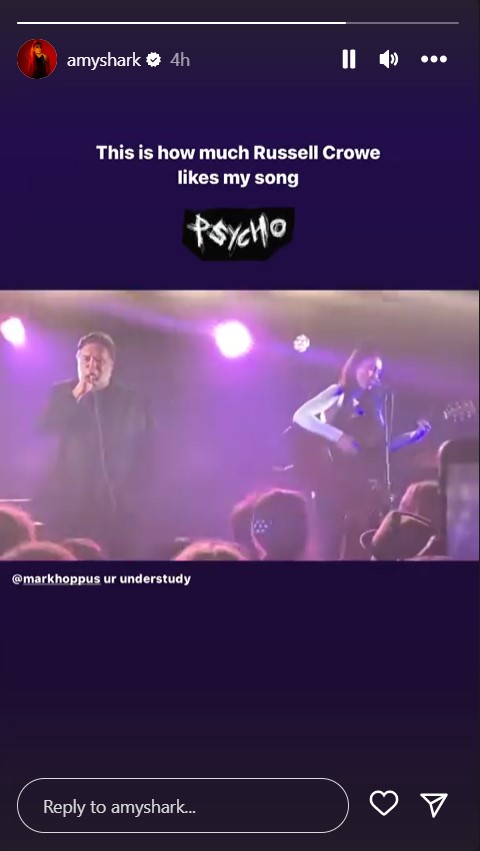 In the ultimate Christmas gift, Amy Shark took on the most challenging job in the world for her nan.

The I Said Hi singer shared a video on Facebook where she revealed, "For the past 5 weeks I’ve been a full-time carer for my nan," which is pretty impressive for a global superstar to stop everything and do.

She added, "we had some extremely hard days. My nan is 95 now and has played a very big role in my life. I definitely feel different after this, not even sure how I feel. Any Carers out there I have so much respect for you, one of the hardest jobs in the world".

The video is filled with bits and pieces of footage from Shark's phone, including serving her nan breakfast and more meals, to her nan's delight; her nan looking for knitting needles and asking her granddaughter, "you're going to learn to knit, aren't you?"; a whistling bird which repeatedly gets on Shark's nerves, and Shark's music playing on the radio in her nan's house. Watch the full video here.

In September last year, Amy Shark announced that she would be a judge on this year's Australian Idol. A teaser clip shows why all the judges have signed on to the show. Harry Connick Jr. says, "I'm here to find something special." Shark is here "to find the diamond in the rough." Meghan Trainor wants to "make a dream come true." Meanwhile, Kyle Sandilands is on the panel to "keep it real." Australian Idol will premiere on Monday, 30 January.

Blink-182 announced new music and a massive global tour that will make its way to Australia in 2024.

The pop-punk legends will embark on their “biggest tour ever” in March, performing in Latin America with Wallows before a massive run of shows across North America with Turnstile and dates all across Europe with The Story So Far before playing next year’s When We Were Young Festival in Las Vegas and finally making their way to Australia and New Zealand in February 2024 with Rise Against.